For the first time in 9 years, a team of students won the competition 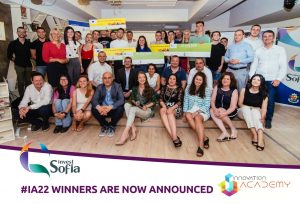 Winner of the ninth edition of the Innovation Academy 2022 is leARn. The team is from First English Language School and the American College in Sofia. Thus, for the first time, the annual competition of the innovation agency Innovation Starter is won by high-school students, not university undergraduates.

leARn won the competition with their idea for virtual learning content. Viktor Nedelchev, Dimitar Kostadinov, and Ognyan Trayanov impressed the jury with a brilliant demonstration of their project and their enthusiasm, motivation, and ambition to further develop the product. leARn won BGN 10,000, provided by the European Investment Bank for the further development of the project, a visit to the European institutions in Brussels, provided by the European Commission, and prizes from Invest Sofia.

In second place is the team Vodoraslo – Denis Ivanov and Vanessa Stefanova who demonstrated their prototype of a bioreactor with algae, which purifies the air. They are students at the University of Architecture, Civil Engineering and Geodesy (UACEG) in Sofia, which is also a precedent for the competition. The team received BGN 10,000, provided by the Bulgarian Development Bank, a visit to the European institutions in Brussels and awards from Invest Sofia.

There is a third precedent in the competition this year – yet another high-school student team hit the Top3 ideas – Alexander Paliyski, Georgi Kolev and Martin Stilyanov from the High School of Mathematics “Acad. Kiril Popov” in Plovdiv. They presented their idea of ​​a virtual currency for the European Central Bank. The team will visit the European institutions in Brussels and also received awards from Invest Sofia.

The competition started with an official opening event on June 3rd and continued with a 24-hour hackathon for prototyping and validating the ideas. Again, Invest Sofia was an institutional partner of the competition, and at the invitation of the organizers, our CEO Dr. Maria Hristova participated as a mentor in the hackathon and a member of the jury.

“At events such as this, young people’s energy and entrepreneurial spirit meet the experience of the experts from Innovation Starter and the business community in our country. We at Invest Sofia know how important this support is and that is why we position startup companies and large international investors and entrepreneurs side by side, as equally important,” Dr. Maria Hristova said during her welcome note to the participants of the Academy’22. She presented Invest Sofia’s instruments in support of the business in Sofia and wished success to the participants.

Over 100 participants joined the Academy this year. Twenty teams were formed, and 17 out of them were admitted to Day 1 to work with the mentors. Eight teams from schools and universities in four Bulgarian cities – Sofia, Plovdiv, Varna, and Blagoevgrad – were admitted to the Finale on Day 2.

Congratulations to the winners and all participants in the 2022 Innovation Academy and Hackaton!