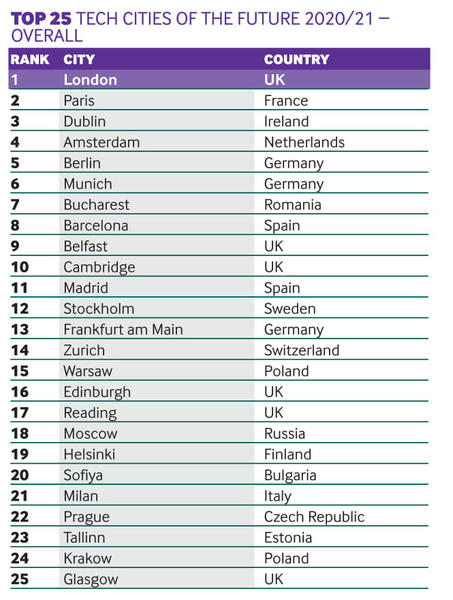 TNW’s and fDi Magazine’s international panel of judges have now selected the winners and top-performing cities in the debut research and ranking entitled Tech Cities of the Future 2020/21. Data was collected for 76 locations in Europe, 25 in total were shortlisted, Sofia being among them.

We are delighted to announce that Sofia has received a high score in the following 3 categories:

Technology Cities of the Future 2020/20  is a debut ranking focused on finding those European cities with the most promising prospects for start-ups, tech and innovation investment. London, Paris and Dublin are the top-ranking cities in the overall ranking.

Cities were evaluated under five categories: Economic Potential, Innovation and Attractiveness, FDI Performance, Cost Effectiveness and Start-up Environment. In addition, surveys were collected under a sixth category – FDI Strategy. Locations that ranked in the top 20 in this category were given bonus points, which contributed to their overall score.

We believe that the next inclusion of Sofia in a prestigious international ranking is of great importance for the positive image of the city and its strong position on the global map of innovation, technology and business hubs.

fDi Magazine, in partnership with TNW, has prepared this debut issue of Technology Cities of the Future 2020/21 to highlight the impact of tech hubs on the global economy. Silicon Valley, with its high concentration of hardware and software companies, is by far the most famous representation of a tech city – but the concept has been exported and replicated across the globe. Tech cities are hugely beneficial to local, national, and international economies. They create employment, attract investment, talent, and can help re-energise local pockets in cities and more remote areas. One thing is for sure: tech cities seldom emerge on their own, rather they are often the byproduct of resolute urban planning and government intervention, the report states.

The full document is available for free download: https://www.fdiintelligence.com/article/77846

In March 2019, the Financial Times acquired a controlling stake in TNW (The Next Web), an events and media company with a focus on new technology and startups in Europe. TNW’s label includes online media (thenextweb.com), The Next Web technological festival in Amsterdam, the transformation and innovation consultancy unit TNW X, a global database of startups, an international platform for cooperation between co-working spaces, and much more. The organization connects businesses, institutions, investors, and startups with a global mission to give impetus to digital transformation and innovations.

Recently, TNW X recognised Sofia for transforming into a major tech hub in Europe by publishing a matrix with over 170 participants, which represent the tech startup environment in the capital. 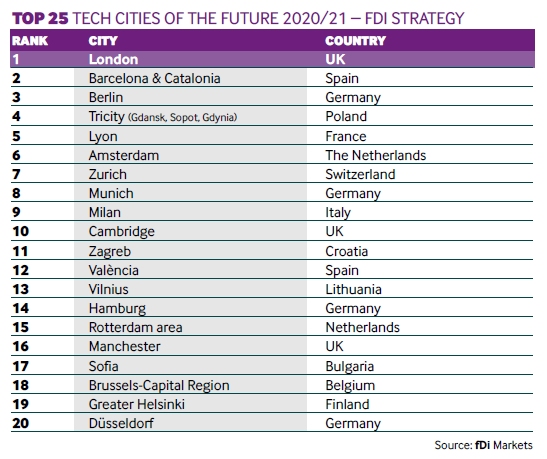 56% of Bulgarian IT companies surveyed increased their revenue in 2020

56% of Bulgarian IT companies surveyed increased their revenue in 2020