Sofia and Bulgaria in the Charts

Bulgaria ranks 37th among 162 countries and territories in this year’s Economic Freedom Index by Fraser Institute (in comparison, Bulgaria was 46th in 2018). This is Bulgaria’s highest position in the Index and our country had the same rank in 2009. Between 2009 and 2015, there was a drop in the country’s ranking, and since 2015 Bulgaria has been climbing the charts every year.

In terms of individual categories, the best performance was in the following indicators: freedom to trade internationally, stable currency, credit market regulations, starting a business. Again, the lowest performance is in the regulations and administrative requirements for doing business and the legal system and property rights indicators.

Among the European countries, Bulgaria ranks behind Romania, the Netherlands, Spain, Sweden, Austria, the Czech Republic and Germany, but performs better than France, Italy, Croatia, Hungary, Poland and Belgium.

This year, the Coface TOP 500 ranking of the largest companies in Central and Eastern Europe includes a record 20 Bulgarian companies – three more than last year. Thus, Bulgaria ranks 7th in terms of the number of companies in the CEE Top 500.

The total 2018 revenues of Bulgarian companies in the ranking reached EUR 21.585 billion and the net profit – EUR 195 million.

According to the data, the total revenues of the 500 largest companies in the region increased by as much as 9.6% to EUR 698 billion. 78.8% of the companies recorded an increase in revenue compared to the previous year.

Poland, Hungary and Romania have the biggest number of companies in Coface TOP 500.

Bulgaria ranks 11th in the Expat Insider rankings of InterNations 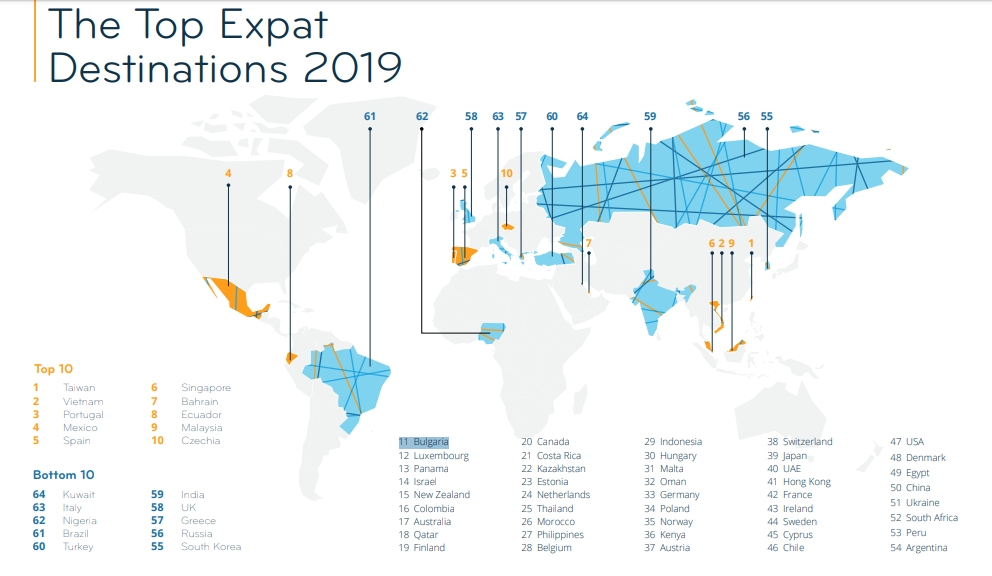 Bulgaria ranks 11th in the Expat Insider rankings of InterNations – a social network of the world’s largest expat community with over 3.5 million members. The company surveyed 20,000 respondents about the life and work of expats in 64 destinations worldwide

Our country has been included in the ranking only for a second consecutive year, climbing 10 positions compared to the 2018 Index, when it was ranked 21st.

The survey includes information on emigrants’ satisfaction with the quality of life and cost of living, accommodation, working life and family life.

Foreigners who live and work in our country value their personal finances the highest (3rd place), and our country ranks first in terms of cost of living. According to 75% of the respondents, it is easy to make new friendships in Bulgaria, and 72% highly value the local cultural traditions. The language barrier is an obstacle. By this indicator, we are 50th in the overall ranking. Bulgaria receives average scores for the quality of life (31st) and ease of accommodation (25th) indicators.

According to Expat Insider 2019, Taiwan, Vietnam and Portugal offer the best conditions for foreigners while Kuwait, Italy and Nigeria have the worst conditions.