Sofia is Among the Brain Business Hubs of Europe 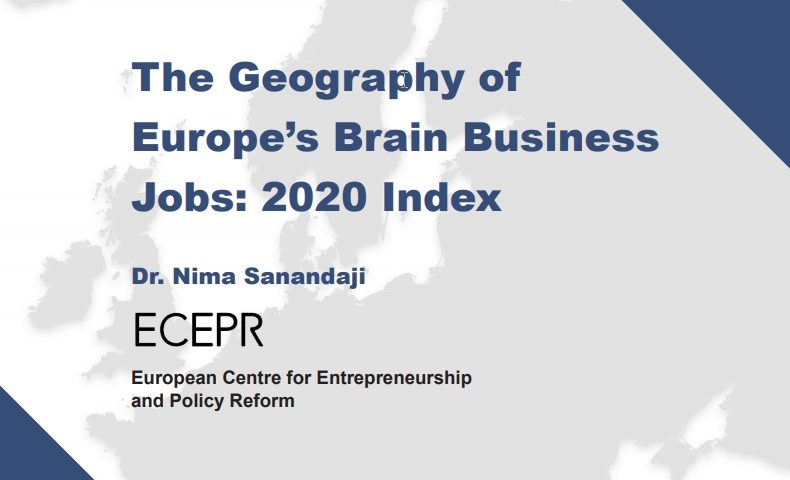 Sofia ranks 27th in terms of concentration of knowledge-intensive jobs out of Europe’s 278 regions, according to the 2020 edition of The Geography of Europe’s Brain Business Jobs: 2020 Index issued by the European Centre for Policy Reform and Entrepreneurship. The study significantly advances the understanding of the geography of knowledge industries and highlights their importance for future income and productivity growth in Europe.

The Sofia region is praised as a new brain business hub of Europe. With the third fastest rate of growth of knowledge-intensive jobs, it keeps building on its previous strong position in earlier versions of the index, followed by Prague and Bucharest. This year, Sofia increased its share of advanced jobs to 10.1 percent of the working age population employed in Brain Business Jobs, which is more than twice the national average and higher than the European average of 6.3 percent.

The report states: “It is evident that the Eastern and Central capital regions, such as Bratislava, Sofia, Prague and Bucharest, are the new hotbeds of Brain Business Jobs. It is likely that these regions will increasingly be linked to the strong Nordic and Western European Brain Business hubs, such as London, the Oxford Region, Paris and Stockholm.”

Compared to the rest of Europe, Bulgaria has strength in design & other creative professions, IT-services as well as telecom, programming and the pharmaceutical sector. In fact, the concentration of highly knowledge-intensive jobs in these sectors is higher in Bulgaria than the European average. Weaknesses are found in head offices & management, engineering, R&D as well as publishing.

Bulgaria has a stronger concentration of knowledge-intensive jobs than Romania, Poland, Croatia, Italy, Greece and Spain. The country has considerable opportunity to continue catching up to the leading European nations, granted that reforms, including anti-corruption policies and investments in higher education, are introduced to boost the business climate.

The report has been published for the third consecutive year. It maps 31 countries and 278 regions in Europe based on how many brain business jobs exist per 1,000 people of working-age. It identifies the presence of so-called “brain businesses”, which are companies that compete through their brain power and specialist expertise. On a country level, Switzerland, Sweden and Denmark top the European list for 2020.