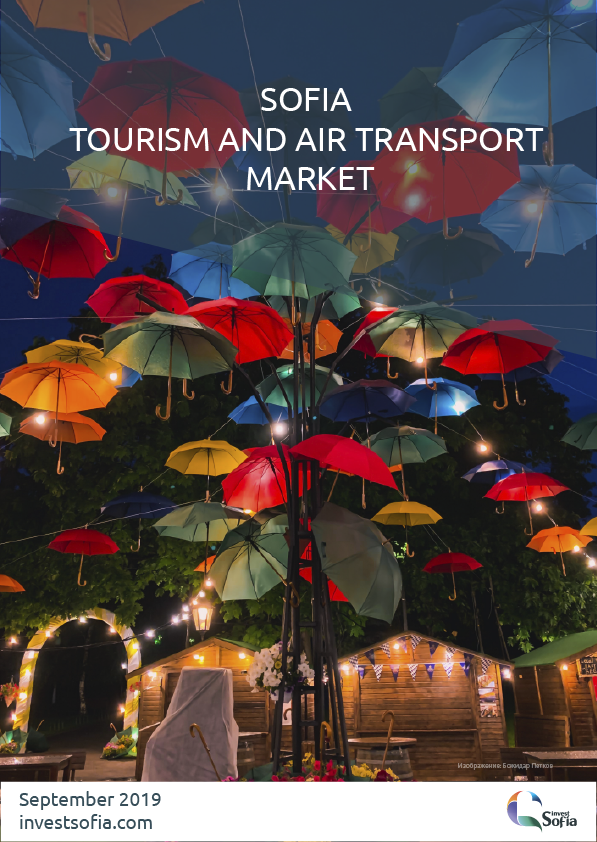 The third edition of the annual report Sofia Tourism and Air Transport Market Report is available for download from our website.

The document presents an overview of the latest data, analyses and reviews of the key tourism indicators, as well as current statistics on Sofia Airport aircraft movements, the number of tourists by country of origin and by the purpose of their visit, the accommodation capacity of the city, the development of the urban environment in Sofia, the potential of the MICE industry, and the most important trends in the sector today.

Sofia Tourism and Air Transport Market Report 2019 is prepared by the Investment and Business Development Department of the Sofia Investment Agency.

Here are some of the key points from the report: 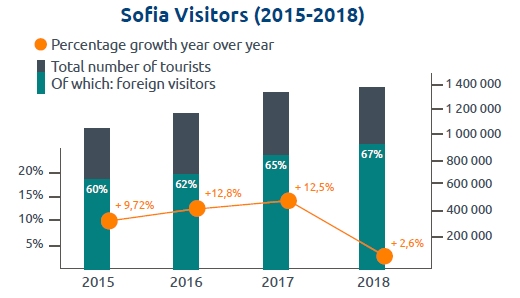 What to expect in the future:

After the particularly strong period Sofia experienced in 2016 and 2017, the tourism growth continued, and is expected to continue in the next few years, although at a slower pace.

The growing number of tourists in Sofia is expected to have a strong positive effect on the further growth of the sector, including the modernization and development of the offered services and the elimination of the currently existing gaps in the overall tourist product in the city. It is expected that it will also put an upward pressure on the prices of accommodation, food and entertainment services.

Following the record growth of the total number of passengers in 2017 – 30.3%, the growth at Sofia Airport continued, but slowed down. Sofia Airport is currently operating at close to full capacity, and the new concessionaire of Sofia Airport will play a crucial role in the Airport’s renovation, expansion and modernisation in the coming years.

A continuing increase in the number of short trips outside the active tourist seasons (city breaks) is expected in the coming years also due to the entry of low-cost carriers and charter flights and the reorientation of tourism from a ‘service economy’ to an ‘experience economy’, focused on the quality of the offered attractions and the experiences created by them. The demand for more specialized types of tourism (e.g. MICE and congress, weekend, youth tourism) will increase. Information and communication technologies will be increasingly used as effective.

Sofia’s SPA and mountain tourism is still underdeveloped. In the long run, the city could benefit from its over 30 thermal springs by expanding the currently existing infrastructure. Vitosha could also offer new types of tourism products and experiences.

The importance of congress and MICE tourism is expected to further increase in the coming years. The growth of the IT sector leads to the organisation of large international congresses and festivals in Sofia (e.g. Webit, DigitalK, etc.), attracting business tourists from all around the world. Sofia has the potential to catch the attention of and to accommodate foreign IT specialists participating in international entrepreneurial or exchange programs, as well as foreigners who want to start a business and move to Sofia.

Sofia Tourism and Air Transport Market Report is based on data from the National Statistical Institute (NSI), Sofia Tourism Administration, Sofia Airport, the Ministry of Tourism of the Republic of Bulgaria, and various global, regional and national market analyses.