Sofia and Bulgaria in The Charts 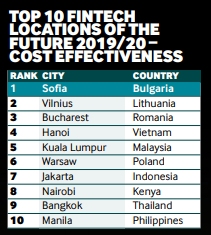 Sofia is in eighth place in the ranking of the best European cities for young graduates to move to. According to one of the six criteria evaluated – rental housing, the capital ranks first among all 32 cities in the survey.

The ranking is by the website Digitalinformationworld.com and uses data about the cities from Numbeo, Eurostat and Eurobarometer. The final evaluation is based on the scores in six different indicators: Rent, Cost of Living, Economy, Presence of other international graduates, Sports & fitness opportunities and Entertainment & culture.

The ranking places Sofia among other attractive cities for young people such as Manchester, Berlin, Stockholm, Vienna and others. Glasgow, Prague and Munich ranked top three.

For another year, Sofia’s Vitosha Blvd. has climbed in the ranking of the most expensive shopping streets in the world. In the 31st annual survey, Sofia’s shopping street climbed to 47th place out of a total of 65 markets in the final ranking. This is one position higher than in last year’s edition.

For the last year, the lease prices in the Sofia boulevard have increased by 12% and the monthly rent currently amounts to an average of €56 per square meter.

Main Streets across the World by consultancy Cushman & Wakefield, with Forton as a partner in Bulgaria, explores a total of 448 commercial destinations worldwide. Again, the main shopping streets in Hong Kong, New York and London are the most expensive. Paris, Milan, Barcelona and Vienna occupy the top positions among European cities. Among the eastern European capitals, the highest prices for retail space are paid in Prague, at €235 /m2 in monthly rent and 18th position in the ranking.

Sofia is the number one fintech destination in terms of price performance in the fDi Fintech Locations of the Future 2019/20 ranking.

The top three fintech destinations in the overall ranking are London, Singapore and Belfast.

Bulgaria is down two positions – to 61st from 59th in the World Bank’s ranking Doing Business 2020.

The report of the financial institution assesses the economies of the countries according to business environment reforms, poverty levels, regulatory efficiency, entrepreneurship promotion, start-up and entrepreneurial environment, innovation, access to credit and investment.

The IMD World Talent Ranking 2019 ranked Bulgaria 52nd among 63 countries surveyed. The country ranks in the Top 5 in two of the indicators – labour force growth rate (unemployment decline) and cost of living.

Among the countries in Eastern Europe, the highest position belongs to Estonia, which is 27th. Lithuania is 28th and Slovenia is 31st.

Switzerland is the leader in the ranking. Quality educational programs for managers and trainees, highly qualified foreigners and high salaries are among the main indicators that make young professionals choose Switzerland.