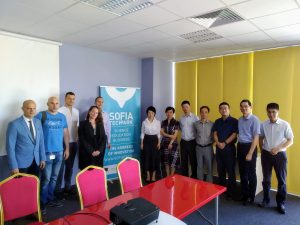 Our team presented the business environment in Sofia and current industry data to representatives of the Ningbo city administration. We discussed the priority industries of the capital city with a focus on the developed human capital of Sofia.

The many initiatives with which the agency seeks to support the city’s economy were also a focus topic of the meeting. The guests expressed interest in the City-to-City program, which helps Bulgarian companies to enter foreign markets and facilitates foreign companies to start their business in Sofia.

One of the highlights of the visit was Sofia Tech Park. The guests from the Ningbo City government gained an insight into the operation of the first technology park in Bulgaria. The tech park’s activities to promote direct cooperation between business and academia were of particular interest. The collaboration with PhD students and professors from Bulgarian universities is crucial for stimulating innovation and creating new products. The useful practices in this direction are of interest to Ningbo, as the city is the economic centre of the southern part of the Yangtze River Delta, an engine of social reform in modern China and an important centre in the automotive, creative and other industries where innovation is extremely valuable.

After the meeting ended, the delegation left for Plovdiv to explore Bulgaria’s second largest city.