Last week our team had a very inspirational delegation trip to Stockholm. In the course of two days, we had a series of meetings with key ecosystem stakeholders in the Swedish capital, organized by the Commercial and Economic Section to the Bulgarian Embassy in Stockholm.

We often travel to cities with a proven innovation track record and successful economic development initiatives to learn from others, connect, tell them and talk opportunities and business. Our interest in Sweden runs deep as many of Sofia-based ICT and tech companies have expressed interest in the Nordics. We felt very inspired by the Swedish culture of cooperation and came back with many takeaways and new ideas.

Here are some key facts about Stockholm that we kept hearing throughout our meetings:

–          Stockholm is second only to the Silicon Valley in number of Unicorns per capita.

–          5 unicorns have been “born” in Stockholm to date: Spotify, King, Mojang, Klarna, and iZettle were all founded in Stockholm. Truecaller is another Stockholm based company about to reach a billion-dollar valuation.

–          The Economist magazine named Sweden the best country in the world for working women.

–          Greater Stockholm is home to Kista Science City – the leading ICT cluster in Europe, hosting the headquarters of global giants like Ericsson, as well as R&D labs and an IoT testbed.

–          Stockholm has a long history in tech with ubiquitous dark fiber infrastructure, provided by the city of Stockholm and connecting every building in the city.

Some of Stockholm’s challenges include a deepening housing shortage and strain on public infrastructure, as Stockholm is of the fastest growing cities in Europe.

Stockholm built a strong brand, based on its strengths and calls itself “the Capital of Scandinavia” and is very vocal about its potential.

We were excited to see how different stakeholders in the city collaborate to create a common vision and ambition for Stockholm with most organizations in the city active in triple helix collaboration. Collaboration is in the Swedish DNA.

Swedish companies have big investments in Bulgaria. A survey conducted by Business Sweden points out that Swedish companies, operating in Bulgaria are optimistic and 87% plan to expand their activities in the country in the next three years. We had the pleasure of visiting the Stockholm HQ of Stillfront to discuss their experience in acquiring the Sofia-based game developer Imperia Online, now one of the 11 studios in the Stillfront group. Imperia Online continues to operate independently and already contributes to high margins to the group financial results.

During a meeting with Stockholm Business Region, a municipal organization, responsible for the promotion of the city of Stockholm as a business and tourist destination we had a long and engaging discussion about city branding, business promotion, and possibilities for future cooperation between the two cities with Staffan Ingvarsson, CEO of Stockholm Business Region, Anna Gissler, CEO of Invest Stockholm and Erik Hellsing, Project manager in Invest Stockholm. We got a firsthand insight on Stockholm’s activities in the field of digitalization, including the city’s dark fiber network from Mr. Ingvarsson, a former CEO of Stokab, the company responsible for building the infrastructure.

Kista Science Park is the biggest science parks in Europe, hosting 972 companies with 32 500 employees. It is home to the HQs of Ericsson, IBM, Tele2 Sverige, and the Swedish Defence Research Agency and now a test bed for IoT and smart city projects. The testbed is coordinated by Urban ICT Arena and involves a diverse group of stakeholders, including major technology companies, the city of Stockholm and Stockholm University. In the testbed, the opportunities of digitalization are developed, tested and showcased in an urban environment, including projects to be utilized by the city.

Swedish Incubators and Science Parks (SISP) is a cluster of over 30 science parks and 40 business incubators with 5000 member companies in Sweden. SISP focuses on open innovation, R&D, commercialization and ecosystem building. Some of SISP initiatives include a member peer-view project. The organization has also been involved in projects like “A challenge from Sweden” –  a platform of innovation and procurement for public bodies, which calls on companies from Sweden and abroad to solving urban challenges, “Swedish Invitation”, a program, part of Sweden’s export strategy, that welcomes selected projects combining sustainability and innovation, “Ignite Sweden” – a matchmaking between start-ups and enterprises and “Going Global”, a program implemented in cooperation with Business Sweden to export Swedish start-ups to new markets.

Stockholm is keen on opening new direct airline routes to cities in Europe and beyond, including Sofia. The city views improved connectivity as a way to improve the brand of the city and to facilitate investment and talent attraction. Today’s visitor might be a future resident.

Sofia Investment Agency would like to thank the Bulgarian Embassy in Sweden and Mr. Valentin Stoev, the Head of the Commercial and Economic Section for coordinating the visit.

We are planning a visit to Stockholm with key Sofia stakeholders and companies. Let us know if you are interested! 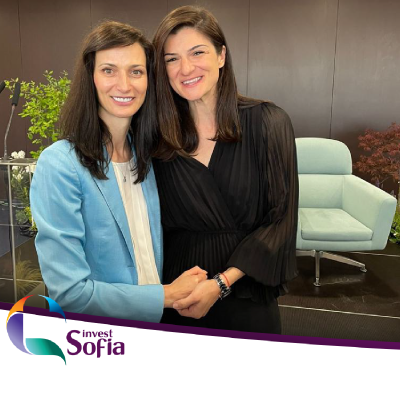