On behalf of the organising team, we would like to invite companies from Sofia, working in the creative and cultural sector to take part in the forthcoming China (Ningbo) Cultural Industries Fair to be held on 12 – 14 April 2019 in Ningbo, China.

The forum is suitable for creative or cultural companies, including the ICT sector – animation, games, smart cities, smart homes, architectural and interior design, robots, culture and tourism software; creativity in digital advertising; products for virtual and added reality, and more.

For additional information and support for the participation process, you can contact the Chinese Cultural Center in Sofia. The deadline for applications is until the end of March.

Participating companies should cover the costs of airline tickets to and from China. The transfer to and from Ningbo, as well as the accommodation in the city will be covered by the organisers. The arrangement of the exhibition space and the construction of related elements (stands, decoration, etc.) will be provided as well. The organisers will also be fully involved in the customs procedures for the import of the exhibition items as well as the materials and products that can be offered for sale during the fair.

You can also contact the Chinese Cultural Center in Sofia to help you pre-arrange B2B meetings with Chinese partners who are interested in external collaborations.

Applications and requests for further information must be directed to Gina Balаreva, phone: 0887080861, email: cccsofia@chinaculture.org 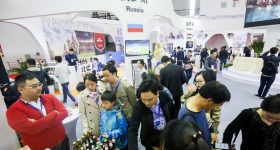 Ningbo is an important port city on the southeastern coast of China, the economic center on the south side of the Yangtze River Delta. Ningbo is at the leading edge of social reforms in modern China and integrates Chinese and western culture.

Recently, Ningbo cultural industry has been rapidly developed. Added value of Ningbo cultural and creative industries exceeded 70 billion yuan in 2017, accounting for 7% of GDP. China (Ningbo) Cultural Industries Fair has always been dedicated to promoting industry transformation and upgrading, accelerating to drive integrative development of “culture plus”, expanding economic and trade cooperation and exchange based on regional advantages in the “Belt and Road Initiative”, and creating important platform for display and transaction of domestic and foreign cultural industries since it was established.

China (Ningbo) Cultural Industries Fair has been gradually become one of the largest cultural fair platforms in Zhejiang province and even in Eastern China after three-year development, which is highly praised and  unanimously recognized by domestic and foreign customers and merchants at the Fair

The Fair contents of exhibition trade, investment negotiation, conference forum, and award ceremony. Total area of the exhibition is 53 thousand square meters. The Fair has been successively convened for three years with total participants of more than 700 thousand person-times. It has four themes of the “Belt and Road Initiative”, tradition culture and modern life, cultural intelligence and digital technology, and innovation and development of cultural industry.

4th China (Ningbo) Culture Industries Fair will be held in eight halls, including “the Belt & Road” thematic hall, “the Belt & Road” urban hall, traditional culture & modern life hall, culture, intelligence & digital technology thematic hall, and cultural industry innovation hall. For “the Belt & Road” international hall, we will invite countries along the silk road and enhance cultural communication and investment attraction on cultural industries between Ningbo and countries along “the Belt and Road” and in “CEE partnership” around the core of taking Ningbo as the port of departure of the maritime silk road.

At this Fair, the economic and trade cooperation between China and EU will be further enhanced, and opportunities of political, economic and social development, cooperation and coordination will emerge, for which we will invite key European cities, icluding Sofia, to present their cultural and creative companies and cultural products.